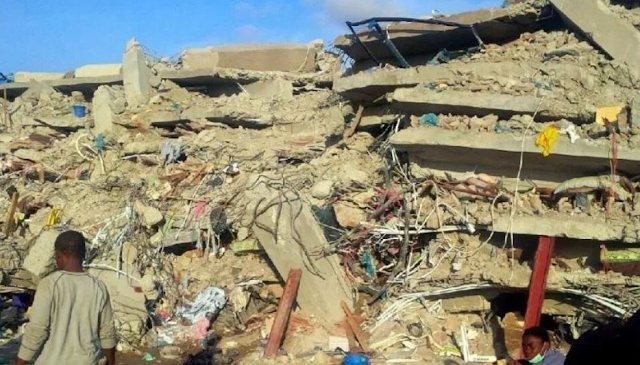 Defendants in the collapsed Synagogue church building Guest house closed their case at the weekend with the cross examination of their last witness in a Lagos high court sitting at Igbosere.

During resumed proceedings, the court heard that the mode of collapse of Synagogue church Guest House negated the characteristics of collapsed building with structural defects.

Professor Patrick Nwankwo stated this while being crossed examined by the Lagos State Director of Public Prosection, Mr Yequob Oshoala.

Nwankwo, a Professor of Structural Engineering and Construction Materials an expert witness at the instance of Engr Oladele Ogundeji who is facing trial for the collapsed building as its Supervising Engineer was before Justice Lateef Lawal-Akapo.

"Any defective building whether emanating from under or over reinforcement, poor constructional materials among others will have a ductile type of collapse.

"That of Synagogue Guest House was too catastrophic and such could only have been caused by an external factor".

Asked by counsel to first defendant, Olalekan Ojo (SAN) what he meant by "the type of collapse", the professor of structural engineering clarified: " if defective or substandard materials were used, the mode of collapse would be ductile and gradual".

He shared in the views of the prosecution that a building with defective structural and substandard materials could lead to collapse.

He however maintained: "different mode of types of collapse is dependent on types of materials used.

"The characteristics of a building coming down on itself is different. If it is structural defect or use of defective materials, the mode of collapse will be ductile and gradual.

"This is not the case with the collapsed Synagogue church guest house. This building has about 12 frames. The frames, beams, columns would not all have collapsed at the same time. It can only happen by some external forces", he said.

While further responding to questions from the DPP, Professor Nwankwo an international expert said he was motivated to conduct investigation on the collapsed Synagogue church building by its unusual mode of collapse, professional and academic concern noting: "Engr Ogundeji is a known competent professional colleague whom I have known over time".

Nwankwo who said he conducted the investigation by visiting the place, asking questions, examining the various investigations already carried out and the technical drawings on the building stated that his reports submitted to the court was thorough in the integrity of the profession".

The European trained expert who had earlier conducted various researches on collapsed structures in the country said he was not involved in the previous enquiries instituted by Corona Inquest on the collapsed Synagogue church building.

Responding to DPP on the Orion Design Software output he faulted on the first prosecution witness against the collapsed building, Nwankwo who is also a Master in Orion design Software operation said what was earlier interpreted from the Orion output was completely wrong because "there's usually a print out of whatever is rejected by Orion software which was not the case here. I used the same 750mm by 225mm and it was not rejected by same Orion design Software as can be seen evidentially in my report. "
Earlier in the cross examination by Mr Oluseye Diyan, Chief Efe Akpofure SAN and Mrs Titi Akinlawon SAN, the erudite scholar and expert in Structural engineering stated there were appropriate international standard codes guiding construction industry and he had examined the collapsed Synagogue church building's structural elements, its design and construction works meeting all the required appropriate codes.

He also revealed that the reports earlier submitted by the witness to the prosecuting counel is mischievous.

He admitted that when a wrong code is in existence, it will affect the conclusion and can’t be relied upon.

He said such conclusion could be termed mischievous.

He admitted the calculation in the report submitted by Lagos state is erroneous and the implication is that exaggerated result will be gotten and the conclusion can’t be relied upon.

He confirmed that since the calculation is wrong, more errors are in that reports findings and as such can’t be relied upon. He, however, defended himself that his own findings in report he tendered in court Is the required code of practice in Nigeria.

The trial which has been on since 2014 when the building collapsed in which many nationals died has undergone protracted trials with several witnesses drawn by both the prosecution and defendants.

Justice Lateef Lawal-Akapo adjourned the case to January 24, 2020
by EfoNews
Share to: