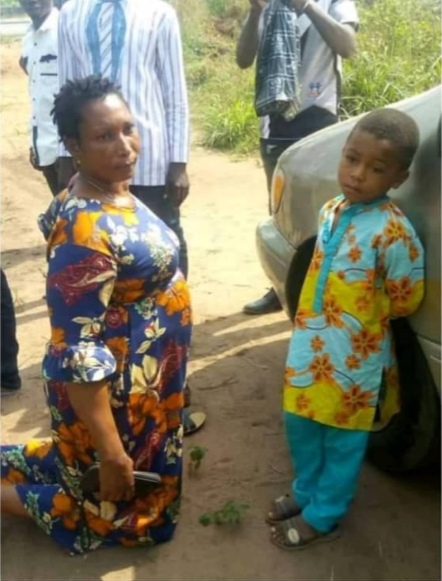 This woman yesterday at one of the RTC bus took to Port Harcourt from Edo Benin city, on the way, they encountered a police checkpoint and the officers there proceeded to inspect their vehicle.

After they've scrutinized the driver, they made their way to the windows of the bus, with their eyes scanning at the people inside the bus. Suddenly one of the officers eyes stopped on a woman with a child, and proceeded to ask her if she was the mother of the boy to which she answered yes.

When the police officer queried a little more about his date of birth the woman answered that she has forgotten. This prompted the officer to call her out of the bus and then commences an investigative section with her.

Read  her conversation with the police officer HERE


She still maintained that the boy was her child and that she just forgot when she gave birth to him, then the police asked her to phone her husband and ask him when the boy's birthday is.

The woman brought out her phone and dialed the number of her purported husband to ask the same question they asked her. The man too replied he doesn't know, he was on loud speaker, so virtually everyone could hear their conversation. After much interrogation, the woman confessed that she had Kidnapped the boy and was transporting him to Port Harcourt.

The boy was found to be Drugged, which made him not to comprehend what was going on at that time. The Police arrested her and one other woman who was believed to be an accomplice.

Kidnapping has been one of the radical social problems we've faced as a people. Parents please take care of your children always.
by EfoNews
Share to: