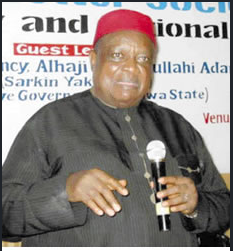 PDP BoT member. A member of the Board of Trustees of the Peoples Democratic Party, Chief Emmanuel Iwuanyanwu, says it is the turn of the South-East to produce the next president in 2023.

He also notes that members of the ruling All Progressives Congress now parading themselves as “avengers” were behind the corruption in the PDP, among other issues, in this interview with RAPHAEL EDE

As a civil engineer, what is responsible for the total collapse of federal roads in most parts of the country and how did you tackle the situation when you were chairman of the Federal Road Maintenance Agency?

The major problem of the failure of roads generally is two things: The first one is faulty design and the second one is faulty construction. These are the two reasons why roads fail. But recently, the cause is mainly poor construction. Now the fact is this, I talked to some engineers recently and I believe that some of us who are senior engineers need to come together and look into these matters because they are getting out of hand.

Nigeria is investing so much in road infrastructure and unfortunately, after the roads are built, they collapse within a short time. This is simply because most of the contractors are not building to specification. When we build roads, there are certain basic engineering requirements. We have various aspects of the foundation; first of all, we carry out the design to ascertain the volume of traffic that goes on the road. The road is not built for every kind of traffic.

The cost of the road will depend on the traffic but here incidentally, most of the roads are asphalt concrete. Asphaltic concrete-built roads are very expensive roads and are durable. An asphaltic concrete road, if properly designed, is supposed to last for about 50 years without any maintenance. But unfortunately in this country, there is hardly any of these roads that last for five years without maintenance.

So, I think the cause is poor design and construction. Usually, an engineer who designs a road is supposed to calculate the run-off and put adequate culvert that will take up that type of water; when that is not done, the road will be alright but when it gets to that point it will collapse. When a road is washed out, it means that the design has not taken into account the proper amount of rainfall in the area; the discharge and the runoff are all supposed to be taken care of in the design.

The contractors just come to do what they like and go. When they award the contract, they should make sure that the contractor who is doing it has got a staff member supervising that job. The person should be a well-qualified engineer who is registered by the Council for the Regulation of Engineering in Nigeria (COREN) and a member of the Nigeria Society of Engineers. That is the person who will be held professionally liable for any failure.

But there have been allegations of compromises on professionalism by both the engineers and major government players, how can this be addressed?

The engineers are professionally liable. If any engineer supervises a job and a contractor fails to deliver a job that is acceptable to engineering standard; if it is discovered, such an engineer will be penalised and disciplined by the Nigerian Society of Engineers and COREN.

As a member of the PDP BoT, how would you describe the recently-concluded governorship elections in Kogi and Bayelsa states in which the ruling APC won?

Frankly speaking, I want to make it abundantly clear that I am in the PDP but I am not a young man, I am a senior citizen of this country and my main interest is in Nigeria. I’m not among those politicians who will come every time to blame the opposition or blame the other parties.

The truth about it is that those of us in the PDP saw the whole thing coming. I don’t want to blame people; you know I have seen people blame the president several times. Blaming the APC is not correct. I am very sad about it because I would have liked the PDP to win. Bayelsa is a PDP state, why should our party fold its hands to allow our members to vote for the APC? Something is wrong.

The truth about it is that Bayelsa is traditionally the strongest PDP state in the South-South. But all these blames on the APC, they blame INEC and so on, I don’t share in them. Our people should have done their part. I don’t share this idea of people blaming people and giving excuses. My advice is that the election is gone and it is over; let us now as the PDP in that state reorganise our group and get ready for the election in 2023. The truth is that the APC won with an overwhelming majority.

There are insinuations that Nigeria under the regime of Major General Muhammadu Buhari (retd.) is divided. They have alleged that he has promoted ethnicity beyond any other leader in the history of the country. Do you agree with that insinuation?

I’m in sympathy with the people who rule this country. He is not an angel but he has his strong points. Every ruler who comes in must be assessed by his strong points. We in the South-East are not happy because if you look at the government of today, you hardly see a south-eastern name mention anywhere.

I think this government has been the worst for us. In fact to bear an Igbo name now seems to be an offence. Before now, you hear the name of Igbo persons in the high positions but now it looks as if there is a general decision that the Igbo people cannot hold high positions. Look at the presidency that is zoned between North and South.

Obviously people know that by this zoning, the South-West and South-South have gone; now that it will be the turn of the Igbo people; but some of them have started given excuses that the Igbo cannot produce president, and so on. How can the Igbo people, who fought for the independence of Nigeria, not be able to present candidates?