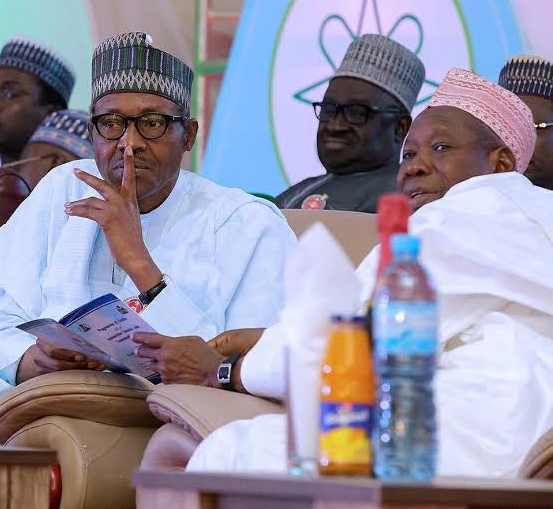 President Muhammadu Buhari, on Wednesday, praised Governor Abdullahi Ganduje of Kano State, describing him as “a skilled politician, a party builder and a man who works for the success of our party.”

Buhari made the comments in a message of felicitations to Ganduje on his 70th birthday.

“The Kano State Governor is one of most patient politicians I have ever met in my life,” he said in a statement on Wednesday night by his media aide, Mr Garba Shehu.

Buhari also noted that “Ganduje is also a committed party man who has worked tirelessly for its success.”

The governor is a member of the All Progressives Congress.

“Governor Ganduje has every reason to give gratitude to God for living to the ripe age of 70 in good health,” the President added.

The President further commended Ganduje for “emerging as the Best Performing APC Governor, which was awarded by the APC Governors Forum.”

The governor, the Emir of Kano, Muhammadu Sanusi II, and the Kano Emirate Council have been locked in a dispute since 2017, worsening after the conclusion of the March 3, 2019 governorship poll in Kano State.

The dispute is said to have political under tones.

The Independent National Electoral Commission had declared Ganduje, who sought re-election for a second term, as the winner of the poll.

However, there were speculations that the monarch got into trouble with Ganduje for allegedly expressing support for the candidate of the Peoples Democratic Party, Mr Abba Kabir-Yusuf, ahead of the poll.