Dr. Daniel Olukoya Comes Under Attack for Saying Christmas is not Biblical 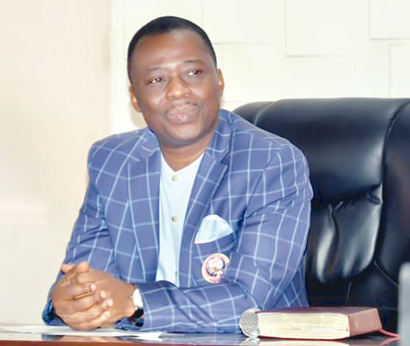 General Overseer of the Mountain of Fire and Miracle Ministries, Dr. Daniel Olukoya has come under attack for his statement during his church service yesterday that Christmas – an annual worldwide celebration among Christians is unbiblical.

During the Manner Water Service at the church’s international headquarters yesterday, which fell on Christmas day, the venerable Pentecostal Pastor said it was not recorded anywhere in the Bible that December 25 was the birthday of Jesus Christ adding that unlike Easter, which is about the death and resurrection of Jesus, which Jesus said should be remembered, Jesus did not say his followers should celebrate his birth.

Dr. Olukoya said: “If you really study the Bible from Genesis to Revelation, there is no word like Christmas. The bible only recorded that the Shepherds were taking care of their flocks during a very cold season when they sighted the star that announced the birth of Jesus Christ. This cold period could be around April or May.”

Tracing the history of December 25 as one steeped in the tradition of the Romans, Dr. Olukoya noted that December 25 was a day celebrated in ancient Romans Empire by the worshippers of sun during Mars festival.

Many Christians on social media have reacted to the statement by Dr. Olukoya and described it as stirring up needless controversy that a section of the Christian denominations bring up every year.

Mr. Abiodun Ogundare, a business executive in his response, said dedicating one day in a year to celebrate the birth of Christ should not be seen by any cleric as idolatry and unbiblical.

Mr. Ogundare quipped, “Do we need to find it in the Bible before we choose a day in a year to honor the King of Kings?? Who cares if he was born on December 25 or April 10? Is it in the Bible that you must choose a particular day in a week as Bible study or prayer meeting day in your church? Is it in the Bible that church must build university? Is it in the Bible that we must fly in the air? Even if you think April or May is the appropriate month for you to mark the birth of Christ, please go ahead and invite us for your carol then and we will come. Jesus deserves a daily birthday celebration and not even this once in a year thing. The Lord who gave us reasons to exist must always be remembered and celebrated. Stop the heresies, stop hypocrisy. The gospel is life.”

In his own riposte, Lagos-based Human Rights Activist, Mr. Richard Akinola decried the statement by MFM founder noting that Christians should be educated that the whole essence of Christmas is the birth of Jesus and not specifically the actual date of December 25. Mr. Akinola added that the significance of Christmas and December 25 should not be lost on the altar of controversy while the argument by the clergy that December 25 is not recorded in the Bible as the birthday of Jesus was misplaced.

“After all, when we were born, it was the date we were told by our parents that we were born that we accept. How are we sure the date is correct but we have come to accept the symbolism. Enough of unnecessary religious controversy that detracts from the real essence of why Jesus came,” Akinola said.

The popular Pastor Olukoya, according the Human Rights Activist can also be challenged on the veracity of why Easter should be celebrated in a particular period of the year.

“If he said Christmas is unbiblical because no such word is in the Bible. I ask him - where is Easter mentioned in the Bible? So, we should also stop celebrating the death, crucifixion and resurrection of Christ because Easter was not mentioned in the Bible. I ask him again, the calendar of January to December his church is using, where is it in the Bible? So, he should also stop celebrating birthdays. When Jesus fed 5,000 people, it was not recorded in the Bible that he used microphone, so why do you use microphone since Jesus didn't use it and was not recorded that any of the apostles used it? The car and plane you use, is it in the Bible, after all, Jesus used donkeys,” Akinola asked Dr. Olukoya.

Notable Lagos Lawyer, Mr. Jiti Ogunye in his response underscored how religious dogmas have continued to plaque Christianity. The Lawyer noted, “Simply ask him where “ Sunday “ the day of service, when he regularly mounts the pulpit to preach the Gospel and articulate his dogmas, is written in the Bible. God rested on the 7th day we are told; Sunday isn’t mentioned. After all, for the 7th Day Adventists, Saturday is rest and worship day; and for the Jews, Saturday is the Sabbath! But then, religious idiosyncrasies and unique sectarian dogmas have, for long, been the distinguishing selling points for many religious organizations. It is sheer evangelical branding!