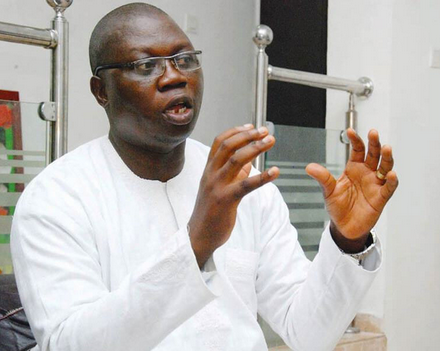 There Aare Gani Adams is the 15th Aare Onakakanfo of Yoruba land. He is a social activist and former leader of a faction of the Oodua Peoples Congress (OPC), which supports an autonomous state for the Yoruba people. Talking with Sunday Sun, he spoke about his views of 2019 and the New Year, 2020, among other issues.

What is your assessment of the outgoing year 2019?

The freedom of expression is eshrined in our constitution, but tactically the Federal Government wants to erase it by bringing in a bill of hate speech which the majority of Nigerians have kicked against. It is a year that the budget sent to the National Assembly doesn’t see hope coming in 2020.

It’s a year we realized that our president is not in control anymore; the people in the corridor of power have already taken over the government from him. The Sowore saga is another thing which the Federal Government did not manage very well, especially the SSS.

If anybody poses a security threat, the government has a right to arrest that person, to detain him within 24 hours and charge him to the court of law. Until when the court proves him guilty before people would know that he has committed that offence. In democracy, there must always be a room for opposition. It is better to be in military uniform than to be a dictatorship in civilian democracy. You can’t survive dictatorship in democrat government. There is a serious setback on the process of our democracy.

What would you say about the arms of government?

I realized that our two arms of government have been caged by the executive. The Senate president openly told Nigerians that anything the executive brings to their table they would grant it. That’s an impeachable statement from any number three person who holds the most powerful parliament.

It’s so sad that people like us that fought for this democracy are here, but those who worked with the military in those days are the ones in charge now. If the government did not pay me back for what I have done, the Yoruba has paid me a certain level of what I have done by giving me this position of Aare Ona Kakanfo. This is my own country. I can’t change my green passport.

I can’t have citizen of any other country like others who believe that if Nigeria does not work, they would fall on their green card. It’s very difficult for me to have such plans because they would use it against me. I have been offered green card, residential permit by many organizations. If not for the love I have for this country I would have had their residential permit and needing no visas to go to those countries, at least European union, 28 countries. Because of the love and because of the sacrifice we have for this country I decided to go with my green passport.

What are your perceptions about the closure of our land borders?

The damage closure of borders has caused to us is more than the advantage that the closing has caused us. I’m not a smuggler, it’s not my route, it’s not my own business interest, but when you study the feelings of the people, you are baffled at the suffering. Before I became the Aare Ona Kakanfo of Yoruba land I listened to the wishes of the people, I realised that the Seme border, the Shaki border, Idiroko border and other borders within the Southwest and the economy of the grassroots are seriously affected.

Are you now telling us that these security institutions saddled with the responsibility to secure our borders, are they not competent to secure our borders and the best solution is for you to seal the borders? This is a year I believe Nigerian government took a wrong decision on external relations in that regard.

Is Nigeria even prepared for 2030 talk less of 2020? A lot of things have been done to affect our institution. Every sector of Nigeria is complaining. Even the civil servants are complaining. Both federal, states and even local government. When you are talking about three tiers of government, it is only the federal and states that are working. The local government tier of government is not active as before because their money is not getting to them.

At the same time, Vision 2020 can never be realized. If they have a plan for Vision 2020 you could have heard them talking that two years ago. I don’t know the plan the government has maybe for Vision 3030 . Nigeria is the only country I see that the government was sworn in on May 29 and certain crop of politicians just rise up again that they want to become president. It is a serious diversion for the incumbent president; it’s a diversion for the incumbent governor and even the incumbent local government chairman.

I will advise the politicians that they should play down their politics in 2020. By middle of 2021 the political atmosphere can be charged because anything now will destroy the entire system. The president will have an excuse that he wants to prepare for his successor because people have been coming out.

If the Federal Government does not manage our international relations very well, the crisis between the government and the international community will be worse than the military because a statement that came from the spokesperson of the president that we are not answerable to the US, Britain and EU, that statement would generate a lot of annoyance because these are the powerful forces in global scene.

They control World Bank, they control IMF, they control United Nations about 99 per cent of the institutions that we use to govern, the whole world they control them. You are not answerable to them, but you get grant from them and they are selling world equipment to you. We would have witnessed another third world war if not for the United Nations. I foresee sanction coming to the government if they do not manage their international relations very well. I foresee international community blocking our citizens from traveling to their countries.

There’s an approval of budget of 30 billion dollars. Already Nigerian owes about N25 billion, the calculation of $30billion will almost get to N11 trillion. Definitely, the money the Federal Government is asking for, if the National Assembly grants the request, Nigeria will be oweing almost N36 billion, and a country with that kind of debt is in bad shape.

Nobody will be thinking of bringing an investment to that country and nobody will be thinking of even borrowing more money to that country. It would bring more inflation to our society and value added tax has been increased from 5.5 per cent to 7.5 per cent and when cost of living is being hiked and wages are not high there will be serious problem. Definitely, we should expect a serious economic hardship in 2020.

There have been major crisis in Southwest in 2019, what efforts are you putting in place to curb it?

I think the Federal Government has tried its best. To solve our security problems now, the onus lies on the Southwest governors. The police have called that they’re ready to partner with the organization. Some state governments because of politics are trying to dodge it and by so doing they could not move forward. Once they dodge, it would be an exercise in futility. Definitely, the ball is on the court of our state governors.
by EfoNews
Share to: