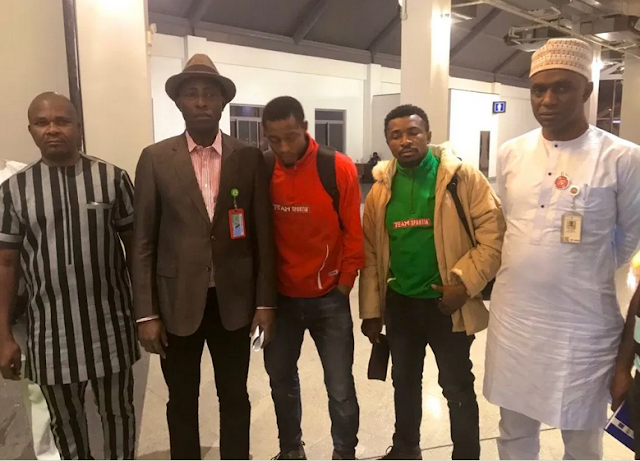 The Ministry of Foreign Affairs wishes to inform of the successful arrival of the two Nigerian students detained at the Irregular Migration Center Sarajevo, Bosnia.

Mr. Abia Uchenna Alexandro and Mr. Eboh Kenneth Chinedu arrived the Nnamdi Azikwe nInternational Airport, Abuja today Saturday 21st December, 2019 on board Turkish Airlines at about 2.05am and were received by the Spokesperson of the Ministry, on behalf of the Hon. Minister of Foreign Affairs, H.E. Geoffery Onyeama. 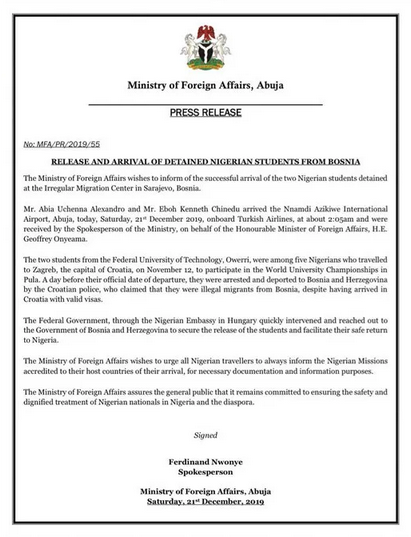 Two Nigerian students of the Federal University of Technology, Owerri (FUTO), who were allegedly at the 5th World Inter-universities Championships, have been wrongly deported to Bosnia by the Croatian police.

The intervarsity event took place between November 13 -17, 2019 in Croatia. According to Total Croatia News, the deportees are 18-year-old Abia Uchenna Alexandro and Eboh Kenneth Chinedu.

After the competition, the group returned to Zagreb, Croatia’s capital, where they waited for their flight back to Lagos through Istanbul, Turkey.

However, at Zagreb, the young men decided to take a walk around the town where they were arrested and wrongly profiled.

Narrating their story in a video that accompanied report made by Total Croatia News, Eboh said they explained to the policemen that they had never been to Bosnia but they were ignored.

He said, “On our way on the street, we lost our direction and a policeman came across us. He was asking us questions but he does not understand English. We tried to introduce ourselves to him but he refused to give us a listening ear.”
by EfoNews
Share to: